It has been brought to my attention some people would like a few updates on the move to Springfield, MO and as I am working on some final edits for a paper thought this was a good lunchtime distraction. 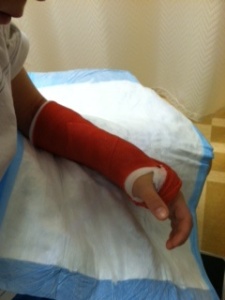 We moved during the hottest summer on record keeping our kids inside the house, until last weekend.  It was a beautiful Sunday afternoon, the wind was blowing and it was a nice 85 degrees with low humidity.  As the good Dad I forced my kids (yes forced – it was a very long ordeal) to ride their bikes for at least 20 minutes before playing the Wii.  Once the debate was over they jumped on the bikes and as a Dad trying to reinvent himself after graduate school I jumped on my bike to ride with them.

Now if you know my oldest he is a good combination of both his mother and me and this ride was bringing out the best of both – the competitive spirit with a side of talking trash.  As any good Dad (remember trying to learn to let loose and have fun again) I challenged him to a race and consequently smoked him.  This got the juices flowing and he was not going to be outdone.  He turned the bike around and started back the other way (downhill) as fast has he could go – tempting me to catch him.  As I blazed by him at 20 mph (32.1 km/h for my science friends) I heard the fateful crash.  As I looked back on the hill here was my son sliding along the pavement with all the flare and volume he could make go along with it….

As I ran to his aid hoping it was pure drama verses reality I saw the blood and road rash.  Hoping this was the climax for the crash I picked him up and watched his left arm drop at 90 degrees 2 inches (5cm) above the wrist.  Yep – Dad was taking him to the ER.  We walked home with his arm in a shirt made sling and the rest would be set in history by these words uttered to the ER.

The transition has been what you would expect when you move across the country to a new job away from family and friends.  The journey of finding a home church and “our own posse” has not been the easiest.  There is a good chance Mary’s posse is going to be Roller Derby!  (tell her she should at least try)  It has been great to connect with Northwest Network friends Bill and Marie Hennessy who have gone out of their way to show us how to manage Springfield.  It is fun to see how friendships from a trip to Nigeria in 1999 can still remain strong.   In the transition Noah (19 year old exchange student from Grandview came with us) has been a delight and made this whole process doable – especially helping Mary put the house together.

This entry was posted on August 22, 2011, 10:12 AM and is filed under Uncategorized. You can follow any responses to this entry through RSS 2.0. You can leave a response, or trackback from your own site.